First Lines Fridays is a weekly feature for book lovers hosted by Wandering Words. What if instead of judging a book by its cover, its author or its prestige, we judged it by its opening lines?

“I’ve memorised their every accusation: Murderess. She did it. She was crouched over her mother’s body, covered in blood.”

Can you guess what book this is? 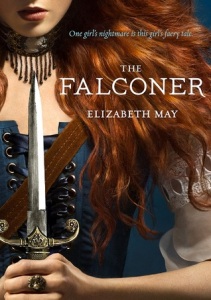 One girl’s nightmare is this girl’s faery tale

She’s a stunner.
Edinburgh, 1844. Eighteen-year-old Lady Aileana Kameron, the only daughter of the Marquess of Douglas, has everything a girl could dream of: brains, charm, wealth, a title—and drop-dead beauty.

She’s a liar.
But Aileana only looks the part of an aristocratic young lady. she’s leading a double life: She has a rare ability to sense the sìthíchean—the faery race obsessed with slaughtering humans—and, with the aid of a mysterious mentor, has spent the year since her mother died learning how to kill them.

She’s a murderer.
Now Aileana is dedicated to slaying the fae before they take innocent lives. With her knack for inventing ingenious tools and weapons—from flying machines to detonators to lightning pistols—ruthless Aileana has one goal: Destroy the faery who destroyed her mother.

She’s a Falconer.
The last in a line of female warriors born with a gift for hunting and killing the fae, Aileana is the sole hope of preventing a powerful faery population from massacring all of humanity. Suddenly, her quest is a lot more complicated. She still longs to avenge her mother’s murder—but she’ll have to save the world first.

The first volume of a trilogy from an exciting new voice in young adult fantasy, this electrifying thriller combines romance and action, steampunk technology and Scottish lore in a deliciously addictive read.

I’ve seen this series around for a while and I follow the author on Twitter, but for some reason have never really looked into these books and I REGRET IT. This book sounds so badass and these first lines have me sold so I need to get my hands on a copy ASAP.

What did you think? Did you guess the book? Have you read it? Let me know your thoughts in the comments!

View all posts by Nicole